With a history spanning more than three decades, the ETA 2824 caliber is possibly one of the best-known and most popular Swiss movements among mechanical watch enthusiasts.

A precise and extremely versatile automatic movement that is found in a wide variety of affordable and super high-end watches as it offers multiple surface planes.

Although all of them are sturdy movements that require little maintenance. It’s also easy to repair and has a good aftermarket.

In this post, we’re going to review all of its history and specifications, and compare the ETA 2824 to the best moves from other brands.

At that time, ETA was called ETA´sa and was already part of the Swatch Group, although they worked closely with Eterna.

To understand this relationship better, we have to go back to the year 1856, when Josef Girand and Urs Schild founded Eterna and created ETA´sa as their division of movement.

At the same time, Urs’ brother Adolf Schild founded ASSA or AS and became one of the most important manufacturers of calibers in the 1920s.

Only a few years later, in 1926, AS merged with Fontainemelon (FHF) and A.Michel to form Ebauches SA, a company that later took over Felsa and founded the Swatch Group, then known as ASUAG (General Swiss Watch Industry) in 1931).

Over the years, ASUAG will continue to bring together numerous companies in the industry between manufacturers of steering wheels, spirals, exhausts and clockworks.

In 1932 Eterna decided to forego the ETA movement department, but was far from breaking up, part of Ebauches SA and thus another company in the Swatch Group.

Most of the companies integrated into Swatch kept their factories and brand, so it is not uncommon for ETA to continue to work with Eterna after the split.

✚ How does it work?

The ETA 2824 is an automatic movement with a bidirectional rotor that works on a ball bearing. A mechanism that also includes a second stop and manual lift.

It is also a modular movement as it is built on the basis of the manually wound caliber ETA 2801 to which an automatic lifting module is added.

The winding works thanks to a system of double wheels (double click wheels) developed by Eterna, which are responsible for enabling the mechanism to charge energy in both directions.

In fact, the ball-bearing rotor is also an Eterna patent from 1948, which was baptized as “Eterna-Matic” in its time and is available in the calibers 1429U and 1439U.

The only difference between the Eterna caliber 1429U and the 1439U is that the latter has a small screw to fine-tune the racket.

Regarding the anti-shock system, ETA 2824 uses Etachoc in the most basic finishes and Incabloc in the highest. Both protect the mechanism from falls and knocks, although the latter has more category.

This movement also has an Etachron control system that allows easier and more precise adjustment of the mechanism.

The 2824 can achieve different precision ranges depending on the type of setting. There are up to four equipment variants for this. They are as follows:

While this does not mean that an ETA movement with a standard finish can achieve greater than + -12 seconds / day accuracy, and in fact, this is most normal.

The precision ranges given by the manufacturers are more aimed at establishing a classification of where the movement should be located, which is almost always more precise in practice.

The relatively humble 2824 can compete with much more expensive precision mechanisms with proper lubrication and adjustment, but is usually also considerably stronger.

The power reserve of the 2824 is approximately 38 to 40 hours when the mechanism is fully charged. This is achieved by turning the wrist or turning the crown.

Thanks to the bidirectional rotor, the automatic module of this movement can be loaded in both directions, which makes it more efficient.

➤ Brands that use it

ETA has been supplying movements to brands other than a major Swiss manufacturer for decades, and the 2824 is one of the most well known and there are many watches out there to assemble it.

Although in recent years the Swatch Group has severely limited the range of ETA movements to brands that are not part of their own conglomerate.

We still talk about a lot of brands though, as Swatch is behind a large number of the major Swiss watch brands on the market. These are some of them:

And here are some of the clocks that use it:

The ETA 2824-2 is nothing more than a later version of the same movement from 1982 and also the last update to date.

One could say that the Sellita SW200 caliber is the market reaction to the ETA 2824 blocking all brands that are not part of the Swatch group.

In fact, both mechanisms are practically identical in both design and operation, but the SW200 is cheaper and easier to obtain.

The Sellita is also made in Switzerland and, as can be seen from the table, its specifications are the same except for this additional gemstone which does not affect the other identical properties at all.

The Miyota 9015 is a bit cheaper and also runs at 28,800 vph, but it can’t reach the levels of precision that the ETA caliber calibrates.

In the standard finish the 2824 can be very precise, but a Miyota 9015 will hardly be able to meet the COSC requirements.

Lego is that one is Swiss and the other Japanese, although both movements have amply proven their reliability over the years.

The Seiko 6R15 is a modern and reliable Japanese caliber that is featured in many of the brand’s new watches, but is not in the same league as the 2824. 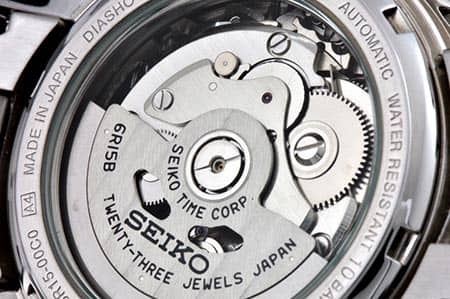 The main difference is in precision as it cannot match the ETA mechanism or its most economical or standard version.

It’s also noteworthy that the 6R15 hits at a lower rate. This means that the needle will not jump from second to second as quickly and therefore its movement will not be as smooth as on the 2824.

Although it exceeds the ETA movement in the power reserve by more than 10 hours, this is something remarkable in a caliber that is much cheaper.

Watches.Wiki participates in the Amazon EU Affiliate Program, an affiliate advertising program that allows websites to earn advertising commissions through advertising and links to Amazon.com

Last update of the links and pictures on 2021-02-04. Prices and availability may differ from the prices published on Amazon.