The Seiko caliber NH35 is possibly one of the most famous and popular automatic movements in the world, which is normal given its low cost and reliability.

An inexpensive and precise mechanism used by many brands of mechanical watches such as Vostok, Invicta, etc., and of course Seiko itself.

In fact, it can even be found in some inexpensive Chinese watch brands such as Cadisen, which offers significant added value.

In addition, the Seiko NH35 integrates advanced operating functions such as the famous second hacking, which further increases its value for fans.

In this post we give a complete overview of the technical data, consider all functions and compare them with other calibers in the same range.

The NH35 is a bidirectional rotor saddle with Magic Lever winding (Magic Cam), a patented system from Seiko that simplifies the mechanism and makes it more efficient.

If we add a rotor that can generate energy in both directions, we are faced with a caliber that can start the watch at high speed and with the slightest movement.

The anti-shock system that protects the mechanism from bumps and falls is SlideshowThis is basically the Seiko equivalent of the Incabloc mechanism used by some Swiss calibers.

This also includes chopping or stopping seconds, which means that the seconds hand can be stopped by pulling out the crown, which allows for a more accurate setting of the time.

In terms of precision, the Seiko NH35 itself is within a range of -20 ～ +40 seconds / day, according to the manufacturer. A value that seems high a priori, but is far from reality.

When a manufacturer specifies a precision range, they are referring to some kind of classification where the motion is to be localized, which in practice is almost always more precise.

If we listen to the opinions of most owners of watches with this caliber, the precision is between 1 and 10 seconds. 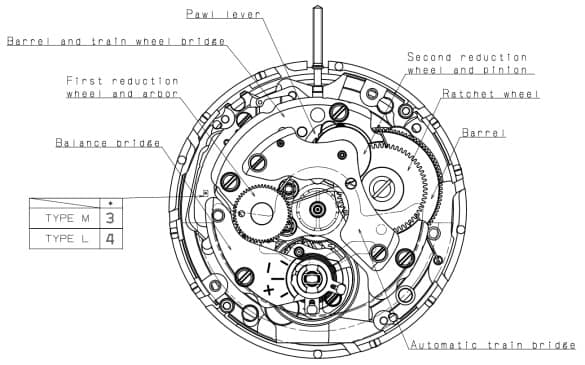 However, it must also be taken into account that the lower values ​​are likely due to measurements on new watches.

In order to check how accurate a movement really is, the watch must have been in operation for at least a year. In this case, the NH35 users are closer to + -20 seconds / day.

In terms of performance or power reserve, the Seiko NH35 can store more than 41 hours of energy when the mechanism is fully charged.

Charging can be done either by moving the wrist or by turning the crown as it can also be lifted manually.

If you choose to do manual loading, you will need to turn the crown approximately 55 times to get the maximum performance from the mechanism.

➤ Brands that use it

Because it is such an inexpensive and easy to source movement, there are many mid-range brands that use it in some of their most popular models. These are some of them:

And here are some of the watches from these brands that include the above movement:

✚ NH35 and NH35A What is the difference?

There is no difference as it is the same movement. The letter A in the Seiko NH35A only indicates that it is the first version of this popular caliber.

If further versions appear in the future (NH35B, NH35C ..), there may be differences to the first version, as these are updates of the movement.

Assuming the caliber NH35 is basically an unmarked Seiko 4R35, the differences between these two mechanisms will be zero or almost zero.

You could say that NH35 is the name of the 4R35 when Seiko makes it for other brands and hides its logo for commercial reasons.

However, if we compare their specifications, we can see that there are small differences, especially in terms of the precision set by the manufacturer:

It is noteworthy that the Seiko NH35 achieves better precision than the 4R35, although in practice there isn’t much of a difference between one and the other.

In short, the main difference is that the NH35s are cheaper and easier to come by, even if the Seiko brand isn’t engraved anywhere.

The Miyota 9015 is one of the most frequently used automatic calibers in mid-range watches due to its good price-to-technical ratio.

A movement of Japanese origin, manufactured by Citizen, that also includes a second stop and manual winding, but is significantly smaller than the NH35.

Also, as you can see in the comparison table, it has a higher vibrational frequency and is slightly more accurate so the reason for its success is understandable.

The 7S26 caliber is one of Seiko’s cheapest automatic movements, but it’s also one of the oldest and already a bit out of date.

Compared to the NH35, the Seiko 7S26 is significantly less precise and does not have the advanced functions of manually increasing and stopping seconds.

Because of its reliability, Seiko has used this caliber in its cheaper models for a long time, but the 4R35 or NH35 is much more modern and a logical evolution for these watches.

The handling of the crown in these calibers is quite simple and intuitive. With these movements you can change the time and date and use the manual lift:

Watches.Wiki participates in the Amazon EU Affiliate Program, an affiliate advertising program that allows websites to earn advertising commissions through advertising and links to Amazon.com

Last update of the links and pictures on 2021-02-04. Prices and availability may differ from the prices published on Amazon.